Agriculture is a complicated and dynamic industry, with many important parameters. One of the most important is your soils water levels, it's crucial for plant growth with the yield of a crop more dependent water levels then nutrient levels or deficiencies. Soil moisture plays many important roles for a plant’s development, including – acting as a solvent and carrying around vital nutrients, regulating soil temperature, assisting in the chemical and biological processes, as well as being essential for photosynthesis.

Water and its distribution come at a cost, so it's important to make sure it's used strategically. Many farmers rely on water catchments and irrigation systems, and with many parts of Australia suffering from drought, they aim to use available water as efficiently as possible. Under-irrigation leads to poor plant health, while over-irrigation is just a waste of resources – it is all a familiar trade-off for farmers.

Soil water content (soil moisture) is usually measured at three levels, the most important being at the plants root level. Farmers often choose to also measure both above and below the root level. This extra information is key in determining what an irrigation cycle or rain even has had on your crops. If a large change is detected on the upper sensor only, it can be assumed that not enough water has made to where it’s needed, at root level. If a large change is detected below the root level, you have possibly applied more water than necessary and could have saved.

Having the ability to physically check a plants state and correlate that to actual soil moisture data is priceless information. A system that logs the soil moisture data over time and displays historical data in clear formats like charts and tables is even better. It immediately adds a degree of smart farming.

Telemetry2U has designed an elegant solution using a private Long-Range Wide Area Network (LoRaWAN) that connects your soil moisture sensors to our Internet-of-Things (IoT) Platform, where you can examine your data in real-time on a dashboard as well as analyse historical data on charts and tables, enabling you to make better decisions on how to use your resources and time.

LoRaWAN has revolutionised the IoT industry by providing a low-power, long-range wireless network for sensor and actuators. A single gateway can cover a huge area of more than 10km line-of-sight and the end-devices (sensors/actuators) usually have an extremely long battery life, well over 5-years.

One such sensor is the Dragino LSE01 soil moisture sensor. It is in a waterproof housing with an IP67 rating, meaning it can easily handle the harsh Australian elements. The sensor is-self is on a 3-meter cable and designed to last a long time, while buried under the soil. It used the Frequency Domain Reflectometry (FDR) technique to measure the soil moisture. FDR soil moisture sensors are considered to be accurate, but they can need to be calibrated for a type of soil as well as be in good contact with the soil, with no air gaps. You can easily calibrate your soil moisture data on Telemetry2U’s interface against a known sample or even your own observations. The main thing to know is that soil moisture data is relative, so you can trust the curve and the rates of change.

As well as measure soil water content, the Dragino LSE01 also measures soil Electrical Conductivity (EC). EC is the measure of salts in your soil and directly relates to the soil’s chemical and physical properties. It is a good indication of how much nutrient is in your soil and is very important to fertility. Once again, Telemetry2U allows you to calibrate your soil conductivity data easily from our IoT platform on any device, even from your phone in the field. 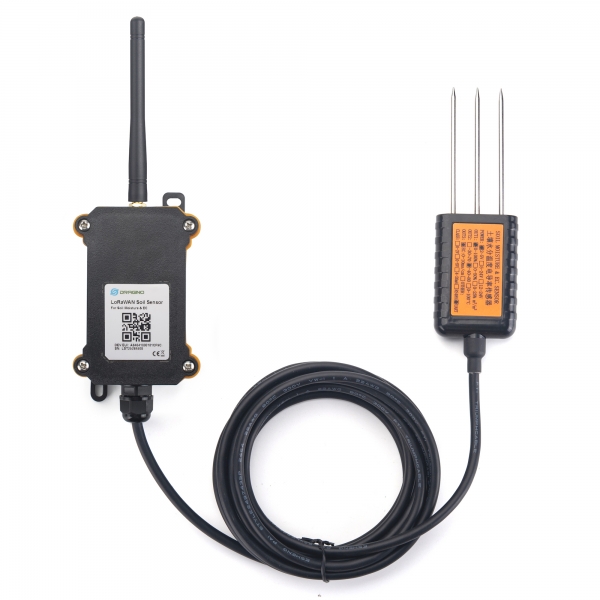 All measurements taken with the LSE01 are temperature compensated and you can see the temperature data overlayed with the soil moisture and soil EC data on our configurable charts, giving you a great insight on how one soil parameter affects another.

Telemetry2U’s reliable alert system can even notify you with either an E-mail, SMS, or a voice call if one of the parameters drifts outside of a programmed range – like we said, our IoT platform is a complete solution.

You can see a working demo of Dragino LSE01 Soil Moisture, EC and Temperature sensor on Telemetry2U's IoT Platform.