Administrators should note there is no way to recover a deleted Audit Report. 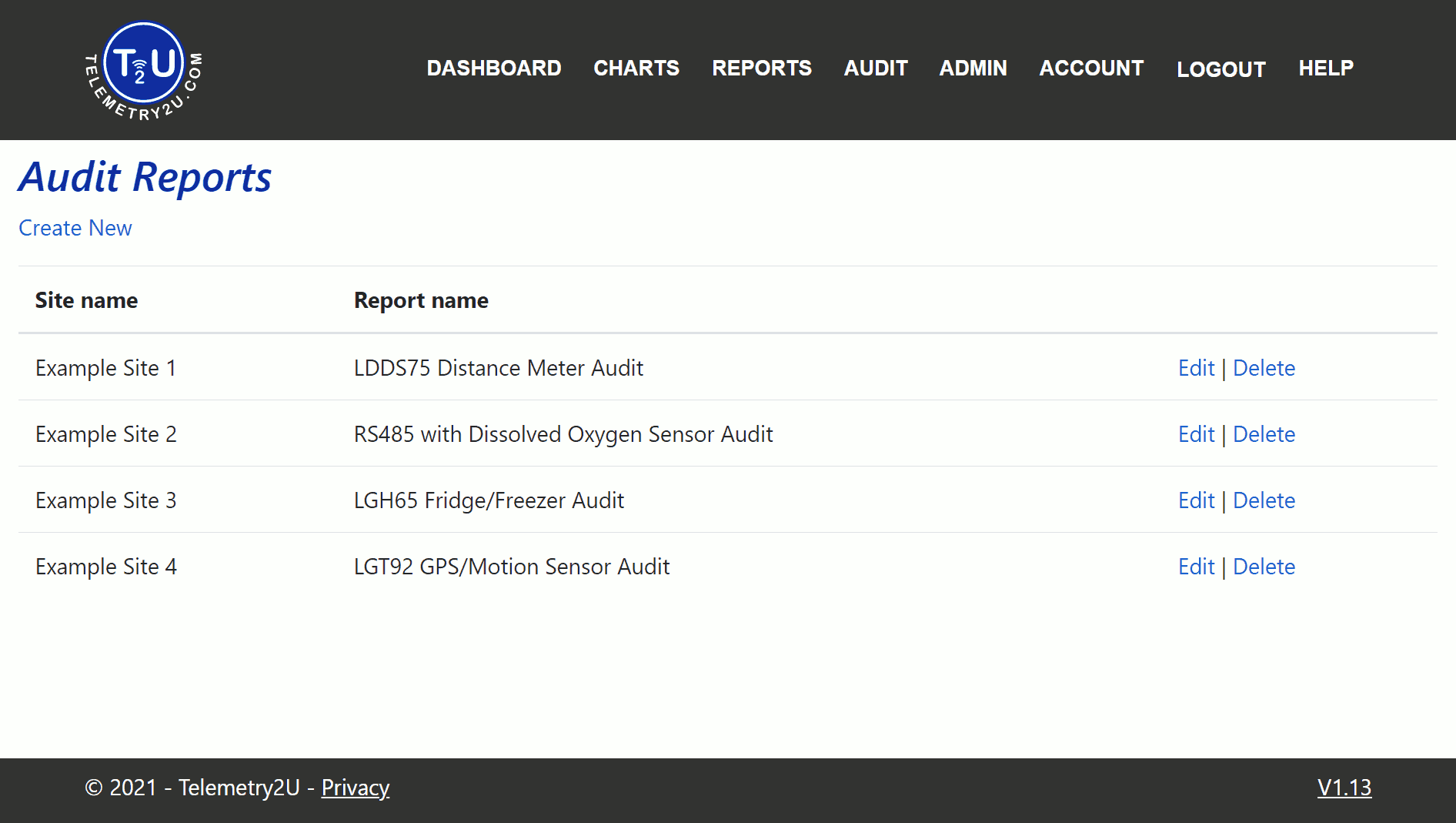 Editing or creating an Audit Report is done on the same screen. You must first pick a node from the 'Add Node' drop down box. It is possible to add as many nodes as you like to a single Audit Report, and it is common to add the same node multiple times. Adding a node more than once is required to report on multiple inputs from that same node.

Once you have selected your nodes, you will need to choose which particular node inputs you want to include in your report.

You are also given the option to add upper and lower limits if required. These limits will be used on the Audit Report Charts to visually mark when the sensor input deviates outside those limits or range.

As an example: a sensor in a Fridge might be configured to 0.0 degrees(c) for the lower limit and 10.0 degrees(c) for the upper limit. Once again, you can add the same sensor input twice and apply different limits depending on your requirements. These limits are not connected to any alert conditions created on the alerts page so must be set here before they will appear on the downloaded audit report.

Once an audit reports has been created and saved, it will be available for download by all users, however, only users with the Audit Admin role assigned under the user access controls will be able to modify an audit report. You can read more about this in Section 6.2.3 - Configure USer Access 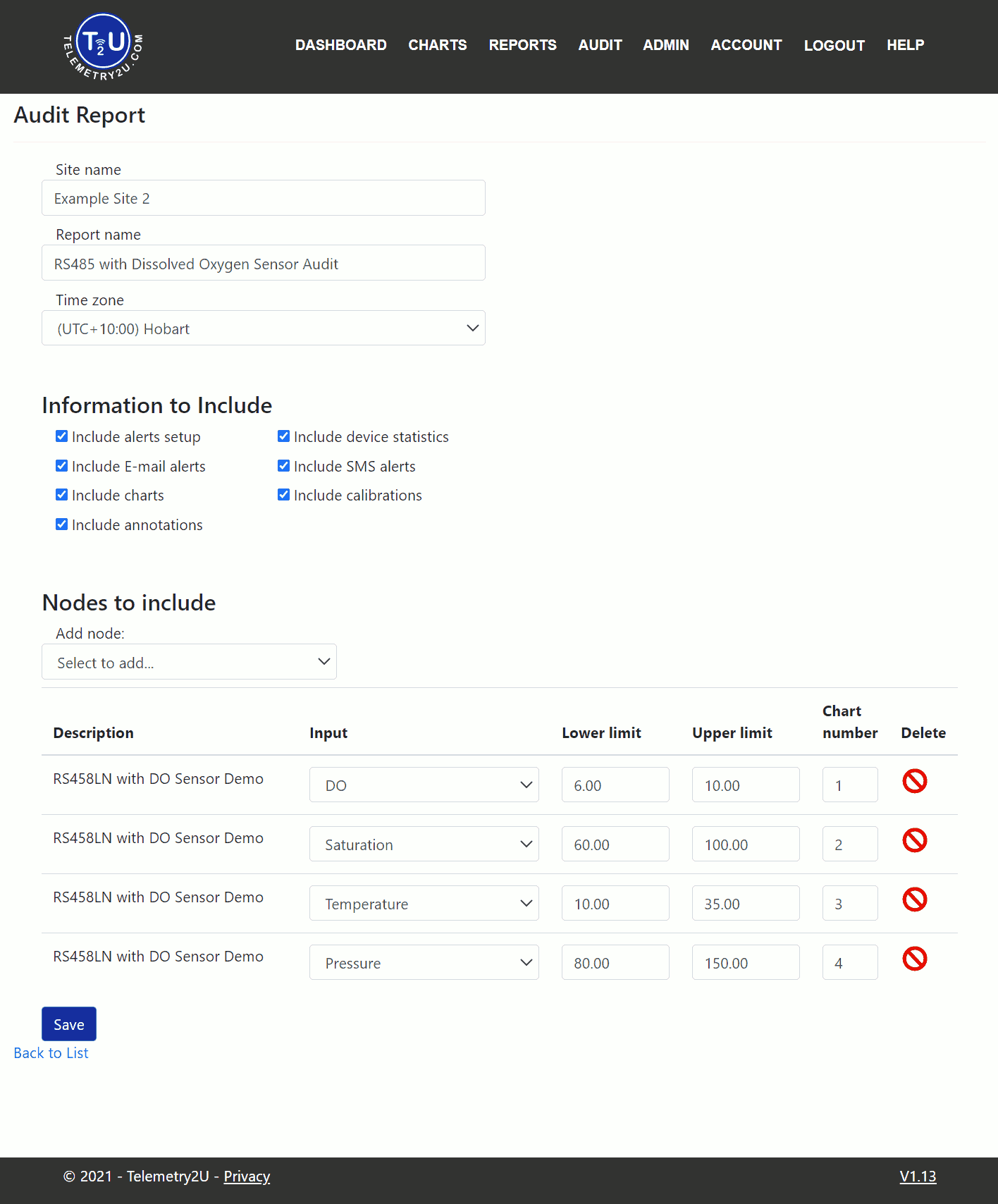 The first three fields on the Audit rports configuration page allow you to set the report name(s) and time zone and must be completed vbefore the page can be saved.

The Check boxes under the Information to include section define what will be included on an audit report when it is downloaded or emailed.

Once you select a Nodes to include from the drop down box, it will appear below where you can configure the following.

The Audits Page is accessible to all users from the main menu. Please note however; unless the user has been assigned the Audit Admin permission in the User Access section, they will not be able to create or edit any Audit Reports, only download them.

To download an Audit Report, first select the report you require from the Audit Name list. Set your Audit Report period by entering your Start Date and End Date, then hit the Load button. Your report will be downloaded automatically in a PDF format. 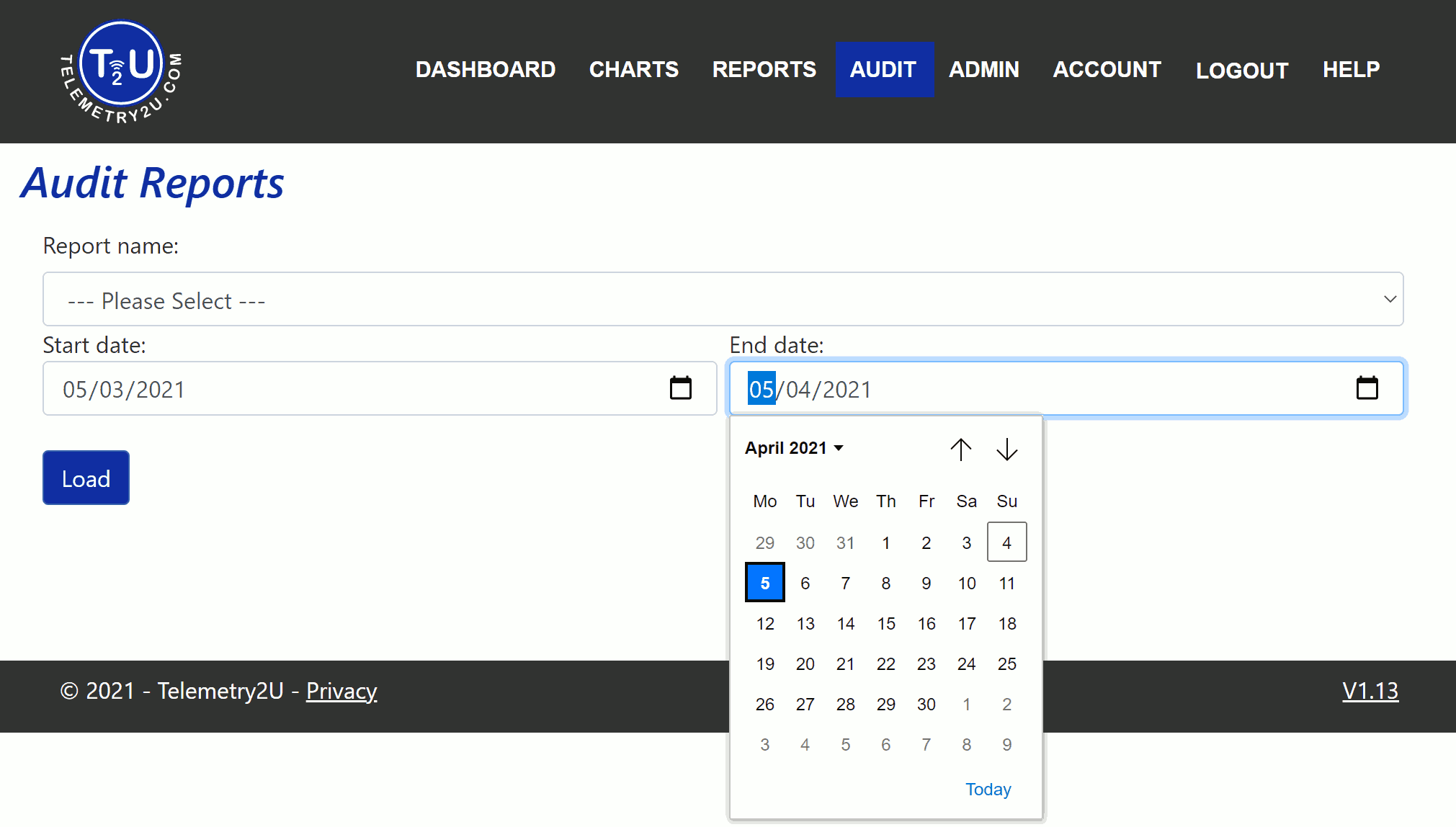 Once you have created an Audit report(s), it is possible to configure them to be emailed automatically at any time you choose. Before starting, ensure you've at least have done the following;

Firstly, navigate to Admin >> Scheduled Jobs. If you have previously created other scheduled jobs, you’ll see them all listed here – you may edit or delete them by clicking on the Edit or Delete link on the right of the page.

To create a new scheduled job, click the Create New link in the top left corner. You’ll be taken directly to a new page where you must enter the following details.

Click the Create button when complete. The Audit report will be sent on the next cycle.

You can disable the scheduled job at any time by clicking on the enabled checkbox. 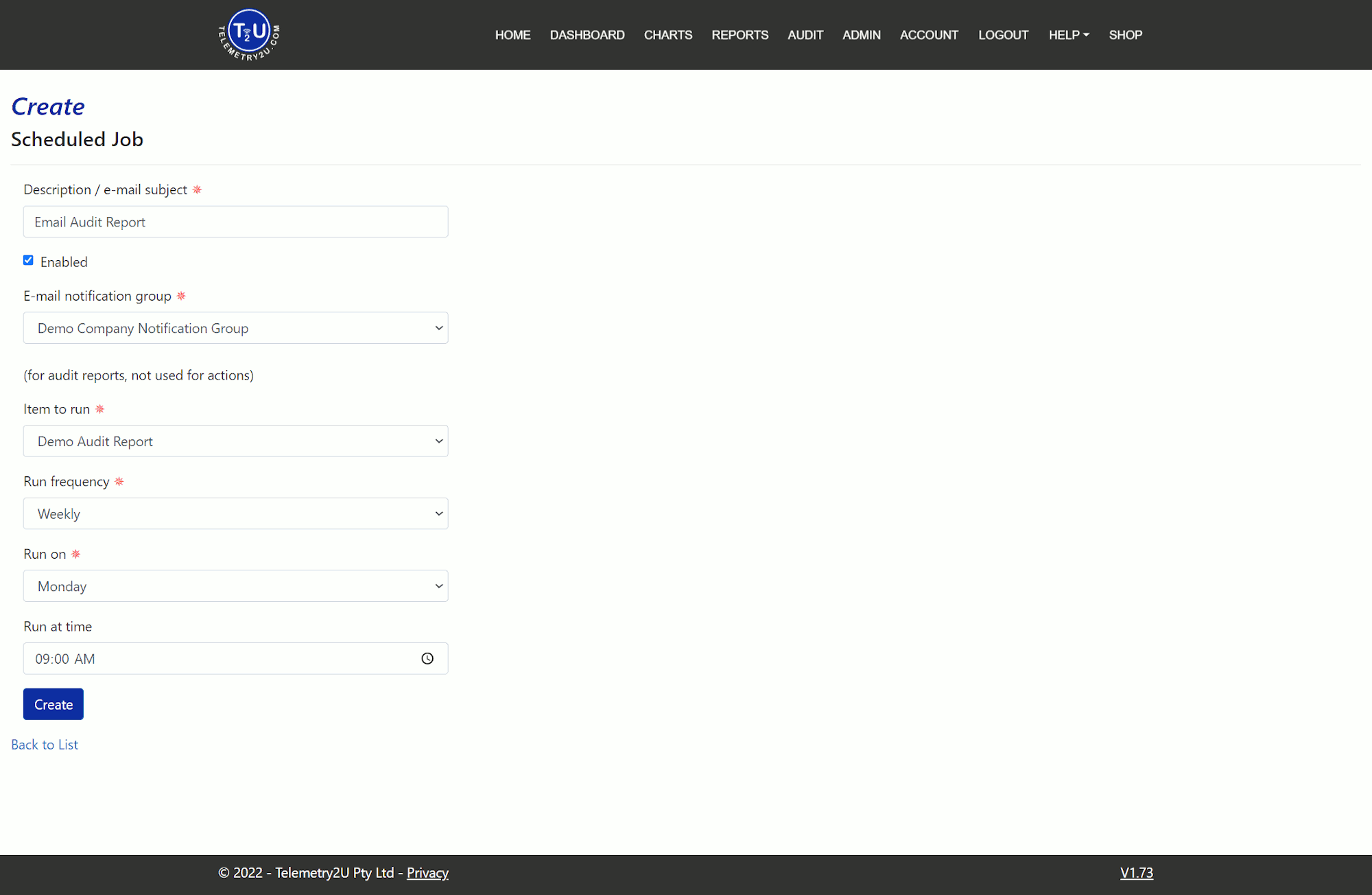 Once you've downloaded an audit report (as described in section 5.2, it is possible to digitally sign (eSignature) the PDF file to save having to print and physically sign the document it before potentially scanning it in order to store it digitally.

A digital or electronic signature is a coded message and securely associates a signer with a document in a recorded transaction. The accepted standard format is referred to as a Public Key Infrastructure (PKI) and it provides the highest level of security and universal acceptance. They are a specific signature technology implementation of electronic signature (eSignature). Telemetry2U handles eSignatures in accordance with the FDA's 21CFR Part 11.

The Digital Signatures section if found at the bottom of any audit report. There are two fields.

In order to apply an eSignature to the appropriate fields, the user will first need to download the audit report to their local folders and re-open the report in a PDF application like Adobe Acrobat Reader since digital signatures can’t be applied from most web browsers.

Once the PDF version is open in Adobe Acrobat Reader, you should be able to click in the relevant signature box. When clicked, you’ll be given the option to either use an existing or create a new digital signature. Read more about Digital IDs on Adobe’s Website. Once a document has been digitally signed, it cannot be modified.

Adobe also makes it possible for a user to request a digital signature from another user. 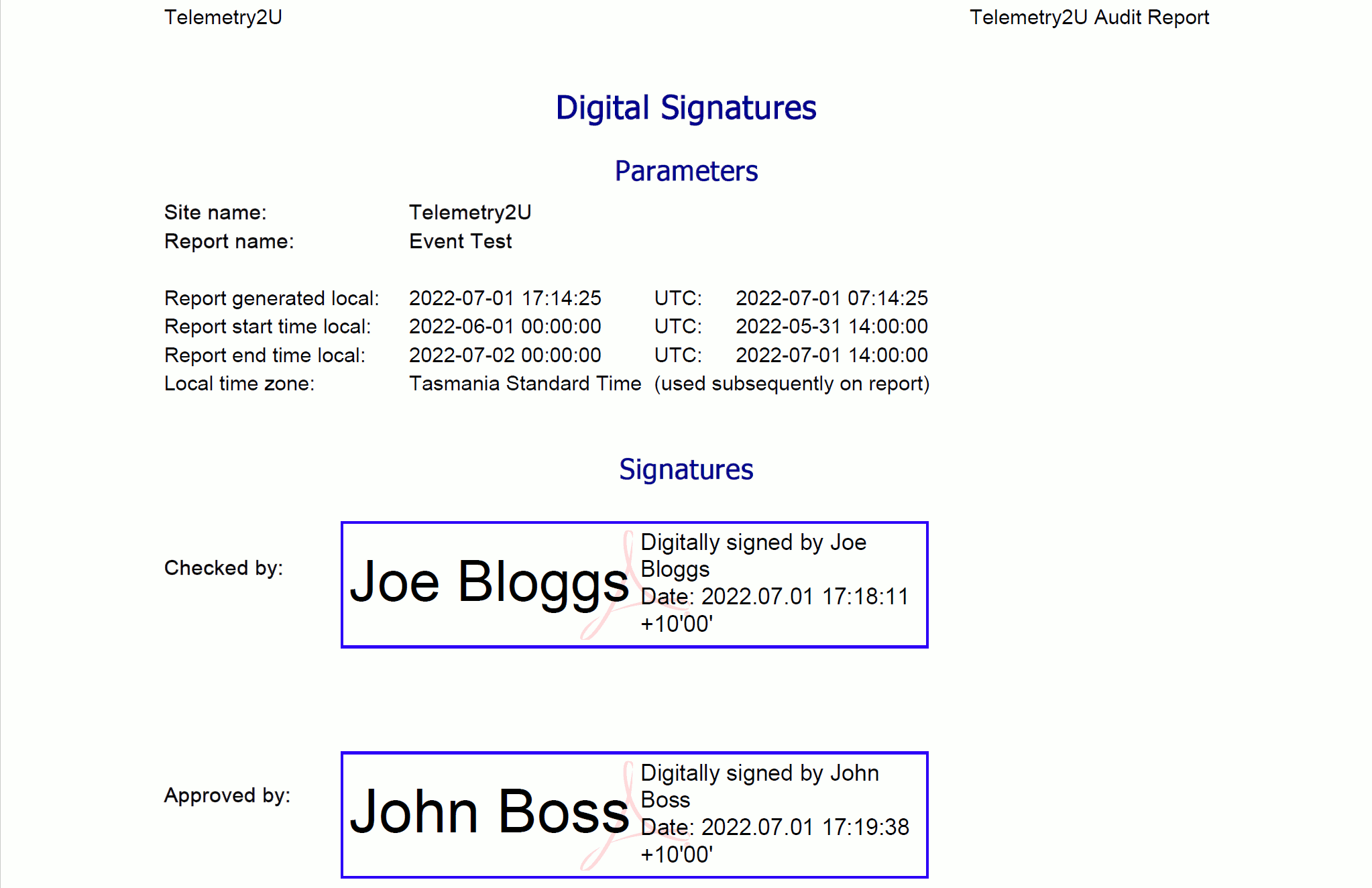 Adobe Acrobat Reader is just one option to place an eSignature on a doccument, there are plenty of other options available that may be preferred.